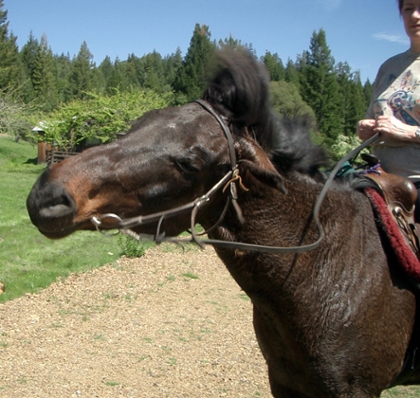 Trigeminal mediated headshaking (HSK) in horses is manifested as a painful disorder consisting of violent head flicks with no apparent stimuli and has been described for over 100 years.  Neuropathic pain is characterized by sudden onset of itching, burning, tingling or electric-like sensations.  In horses with headshaking, this neuropathic pain may be manifested behaviorally by sudden jerking of the head, rubbing the nose on objects, lip movements and snorting. Severely affected horses may sustain substantial self-inflicted trauma.

Involvement of the trigeminal nerve in HSK has long been suspected and recently confirmed by electrophysiological studies by our research group using a novel technique to evaluate the function of the maxillary nerve in an objective manner.

Discoveries made by our equine and comparative neurology research group include:
•    Abnormal electrophysiology of the trigeminal nerve in affected horses
•    A subset of horses with headshaking have a strong light trigger (photic headshaking) similar to the photo sneeze in humans. When exposed to natural sunlight the trigeminal nerve is stimulated to fire a painful signal
•    Cyproheptidine treatment for headshaking - 64% of owners report improvement
•    Headshaking is a seasonal disorder in many horse with geldings being over-represented
•    Dietary factors may aggravate headshaking (intravenous fluids mimicking diet)

Abstracts of key articles are below.

Background
Idiopathic headshaking (HSK) in horses is a distressing disorder in which the etiology and pathophysiology are unknown.
Hypothesis
Differences in sensory function of the trigeminal nerve exist between healthy and affected horses.
Animals
Six healthy mature geldings and 6 mature geldings with idiopathic HSK.
Methods
Prospective study. Sensory nerve action and somatosensory evoked potentials studies were performed. The stimulus site comprised the gingival mucosa dorsal to the maxillary canine. A pair of recording electrodes was placed along the sensory pathway of the trigeminal complex at the infraorbital nerve (R1), maxillary nerve (R2), spinal tract of trigeminal (R3), and somatosensory cortex (R4). Sensory nerve action potential latency (ms), amplitude (μV), duration (ms), area under the curve (μVms), and conduction velocity (m/s) were calculated.
Results
Threshold for activation of the infraorbital branch of the trigeminal nerve was significantly different between 5 affected (≤5 mA) and 6 control horses (≥10 mA). After initiation of an action potential, there were no differences in all parameters measured and no differences between left and right sides. A horse with seasonal HSK tested during a time of no clinical manifestations showed a threshold for activation similar to control horses.
Conclusions and Clinical Importance
This study confirms involvement of the trigeminal nerve hyperexcitability in the pathophysiology of disease. Further, results might support a functional rather than a structural alteration in the sensory pathway of the trigeminal complex that can be seasonal. The horse could serve as a natural animal model for humans with idiopathic trigeminal neuralgia.

Seven horses with headshaking are described. No physical abnormalities were detected in any of the cases. Six of these horses had onset of clinical signs in the spring. The role of light was assessed by application of a blindfold or dark grey lens to the eyes, covering the eyes with a face mask and observing the horse in total darkness outdoors. Cessation of headshaking was observed with blindfolding (5/5 horses), night darkness outdoors (4/4 horses) and use of grey lenses (2/3 horses). Outdoor behaviour suggested efforts to avoid light in 4/4 cases. The photic sneeze in man is suggested as a putative mechanism for equine headshaking. Five of 7 horses had improvement with cyproheptadine treatment (0.3 mg/kg bwt b.i.d.). Headshaking developed within 2 calendar weeks of the same date for 3 consecutive years in one horse. Neuropharmacological alterations associated with photoperiod mechanisms leading to optic trigeminal summation are suggested as possible reasons for spring onset of headshaking.