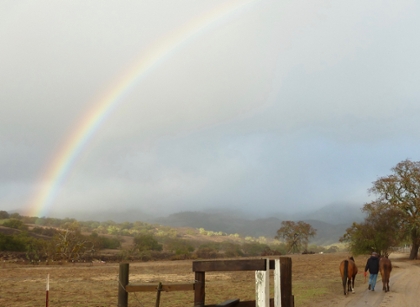 When the difficult decision to perform euthanasia of a horse is made, we as veterinarians want to be certain that this is done in the most humane way possible. The American Veterinary Medical Association has approved methods for performing euthanasia and the most commonly used procedure is intravenous injection of pentobarbital, which is a potent anesthetic agent.  Questions we wanted answered were: When does the horse lose perception of consciousness and awareness of what is going on? If there is any movement immediately after the injection is the horse feeling anything? These concerns regarding the welfare of the horse during this procedure led us to perform the first scientific study of what happens in the brain during pentobarbital euthanasia using brain wave (EEG) science. There was to our knowledge no actual scientific evidence that consciousness and perception based on EEG has been determined. Further, no studies of brain death were based on brainstem functional testing such as BAER.

Recently our comparative neurology group led by Dr. Monica Aleman performed testing to determine perception and consciousness in horses at the time of pentobarbital euthanasia in horses being euthanized for medical reasons.

Dr. Aleman determined that horses rapidly lose all perception of consciousness within 10 seconds of administration of pentobarbital and the brain wave is flat. The electrical activity of the heart continues for some time in the absence of brain wave with pentobarbital. Any movements in the patient are simply reflexes. This information has reassured veterinarians as well as animal owners that their beloved animals feel no pain or anxiety during veterinary euthanasia. This work would apply to many other species.

Along with Dr. Eric Davis, our research group investigated a method for humane field euthanasia in horses that would have carcass contamination and environmental risk as occurs with pentobarbital euthanasia. We found that the combination of xylazine- ketamine anesthesia and intrathecal lidocaine was a humane method of euthanasia and did not result in significant tissue residues to produce environmental concerns.

The UC Davis Center for Equine Health devoted an entire issue of the Horse Report to address the many issues associated with end of life in the horse. Online version of the issue, Caring for Horses through Life and Death, can be accessed at http://viewer.zmags.com/publication/2bf1d0e8#/2bf1d0e8/1 .

Studies are cited below which involve humane euthanasia options for veterinarians.