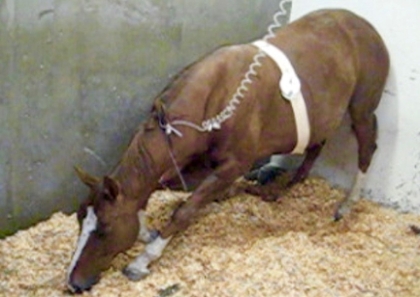 Sleep is essential for the overall health of the horse. Horses are polyphasic sleepers meaning that they have multiple periods of sleep (usually short) throughout the day with most of their sleep occurring at night. Our group has studied sleep in horses and defined various stages of vigilance based on continuous clinical observations with concurrent electroencephalographic studies. States of awake, drowsiness, slow wave sleep (based on EEG), and rapid eye movement sleep (REM) have been documented.

Horses can sleep about 3 hours distributed throughout the day and lasting a few minutes each time. Horses can do slow wave sleep while standing. However, if comfortable and safe, horses will lay down to do this stage of sleep. Horses cannot have and maintain REM-sleep while standing since all the muscles lose their tone in this stage of sleep. Therefore, horses must lay down to do this part of their sleep which usually comprises 20-30 minutes of their total sleep throughout a 24-hour period. 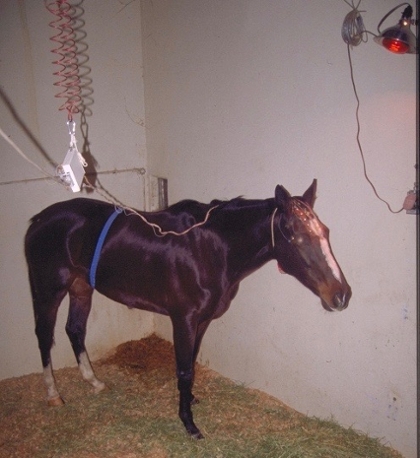 The influence of sleep on the equine electroencephalogram (EEG) has not been well documented.

The objectives were to develop a noninvasive method of electrode placement for recording the EEG in horses and to establish normal EEG parameters for the various states of vigilance. Findings are compared with previously published reports on equine sleep based on electrocorticography (ECoG).

Overnight EEGs were recorded digitally in association with simultaneous videotaping of the horses' behavior. Data were analyzed by visual inspection, states of vigilance were identified, and representative segments were quantitatively processed. Transient EEG events were examined.

Slow wave sleep (SWS) was significantly different (P < .05) in frequency and power from drowsiness and rapid eye movement (REM) sleep. Second-degree heart block was associated with SWS as were transient events commonly recognized in EEGs of humans. Drowsiness and REM sleep were similar. In both, background activity was low-amplitude β activity admixed with prominent activity of approximately 4 Hz. Standing REM sleep was associated with numerous partial collapses in 1 horse.

Normative data for several states were described and probable benign variants identified. This information will serve as control data for sedative and anesthetic studies in this species. The sleep patterns observed during this study are those of horses removed from their usual surroundings, and thus may represent those encountered in a clinical environment.