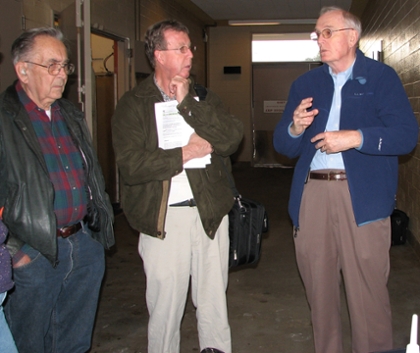 The Comparative Neurology Research Group is headed by Dr. John Madigan and Dr. Monica Aleman.  We are clinicians in the veterinary referral hospital, researchers, discoverers, investigators, sleuths, mentors and teachers.  We use insight and hunches when there is no other information available to pursue a diagnosis or cause of an animal illness. We believe in the One Health concept that we are all part of one functional living entity- human or animal, and that we can apply what we learn from animals to people and vice versa. We have made discoveries that have changed the world for many animals and people.

At UC Davis animals come to our clinic where we are the last resort, the last chance, the final opinion. This is an enormous responsibility and with it comes challenges but also opportunities to think outside the box. The most challenging of these often involve the nervous system, something wrong with the brain or the spinal cord or nerves and muscle. Sorting these out often required that we explore every resource within the massive UC system of basic science and medical school, as well as other institutions.  Dr. Aleman is board certified in both internal medicine and neurology and her PhD research focus allowed her to find the gene for malignant hyperthermia in horses. She directs the neuromuscular laboratory at UC Davis where muscle samples come from humans, infants, adults as well as animals, for specialized examination.

Our other approach is to challenge pre-conceived ideas, which do not make sense to the epidemiology of the condition. An example is the maladjusted foal which for 100 years was thought to be due to low oxygen and disrupted brain circulation (hypoxia-ischemia) and was found by our team to be caused in many cases by a persistence of the hormones secreted by the foal in the womb which keeps the 100 plus lb. foal asleep and prevents the foal from galloping in the womb. They must transition to standing, nursing and moving with the mare- they are prey animals. This massive change from being asleep for 11 months in the womb to trying to run must be coordinated precisely and must be foolproof. If the foal woke up in the womb it would be death to the mare and foal both. We determine foals with maladjustment fail to transition consciousness at birth- a new never described syndrome. We determined birth canal pressure is one of the key signals and using a novel squeeze method to mimic birth canal pressures during birth, we have foals waking up and snapping out of what was thought to be low oxygen brain damage. We have other examples of novel discoveries, which we will share over time on this web site.